A major part of tackling gender-based violence in Greater Manchester will be through a sustained public engagement and behavioural change campaign.

In December 2021, the Mayor of Greater Manchester, Andy Burnham, launched a campaign aimed at men and boys – challenging their behaviours to tackle sexual harassment of women and girls in public spaces.

The campaign began with a powerful video highlighting the experiences women and girls face going about their daily lives.

It told the story of a young woman being sexually harassed on social media, out jogging, coming out of a coffee shop and out at night. The everyday behaviours in the video are engrained in society and sadly, some people may perceive them to be innocent.

The video started a conversation with men and boys about why these types of behaviours are not OK. They are unsolicited intrusions which make women feel uneasy, threatened or even vulnerable.

A video of the press conference launching the video and campaign can be watched on our YouTube channel, and the launch film can be watched via the YouTube link below: 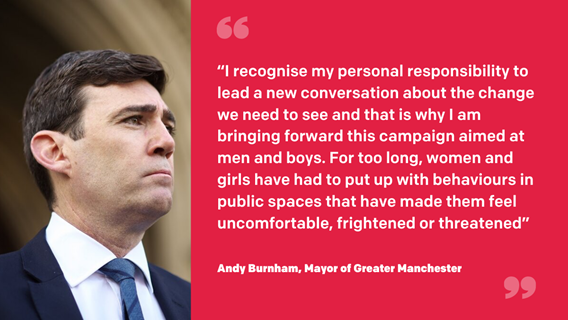 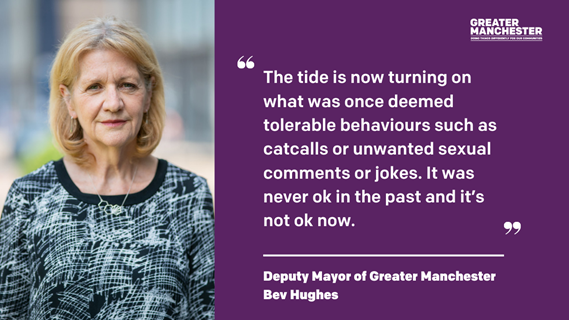 We worked with women’s groups and men and boys as part of the development of the video and the storyboard was based on experiences of women and girls across the UK. The campaign is part of Greater Manchester’s 10-year Gender-Based Violence Strategy published in September 2021.

Following our 2021 video, we will be launching the next phase of our public engagement campaign – focussing on changing the behaviour of men and boys, improving the safety of women and girls in public spaces, and taking our campaign into schools and colleges across the city-region.

Ahead of the launch of the next phase of our public engagement campaign, we released two films to follow-up our original video as part of a soft launch phase.

The first film was released alongside a press release, which can be read on our news webpage.

The next phase of the campaign was launched in December 2022. The aim of this phase is to show that calling out behaviour that isn't OK in a small, everyday way can make a change, and is aimed at men and boys aged 18-35. A launch film was released alongside a press release, which can be read on our news webpage.

You can watch our latest films via the links below or by going to the campaign website:

Follow @IsThisOKGM on social media to find out more and be part of the change. Our social media channels are listed below: