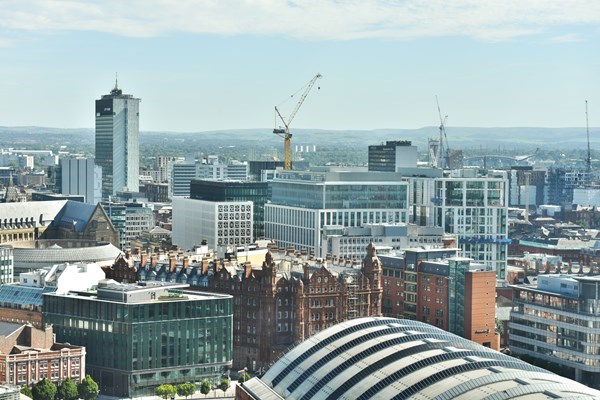 “I am now proposing that the SoS issues a new Direction”

High levels of air pollution from road traffic have a major impact on people’s health across Greater Manchester and lead to over 1200 premature deaths every year.

We are committed to cleaning up the air our residents breathe – but in a way that helps people to make the change and does not put jobs, livelihoods and businesses at risk.

There is a danger that the benefits of the Clean Air Zone (CAZ) are being lost, so let me just state one of them.

In the next few months we will see over 80 per cent of our bus fleet in Greater Manchester meeting cleaner emissions standards, this compares to around 10 per cent in 2018.

Picture the end of the school or college day in Greater Manchester. It is a common sight to see a cluster of very old vehicles outside and our young people are left to choke.

However, the current Greater Manchester Clean Air Zone (CAZ) was designed before the pandemic. It was based on a legal direction from the Government requiring action in all 10 Greater Manchester boroughs to clean up the air and compliance in as short a time as possible and by no later than by 2024. It is the nature of this Government direction, and the tight timetable, which has shaped the CAZ proposal, together with the Government’s requirement to use a charging CAZ as the default option.

We have repeatedly raised concerns over a number of years about the level of funding being offered by the Government to help people upgrade vehicles. These concerns intensified last year when the effects of the pandemic became clear.

Think back to the Tier 3 debate. There’s something of a parallel. The government imposes restrictions on Greater Manchester but then fails to help us through them and to support people. It is a direct parallel to what we went through in late 2020.

You might recall that I criticised the Government’s failure to agree to our request for hardship funding for people with the oldest vehicles who would have the biggest financial impact and would find change hardest. In addition, I commissioned work last year to look at changes in the vehicle market so we could consider the impact that the CAZ proposals would have on individuals and businesses given the pressure we see on global supply chains. This pressure has restricted the availability of new and second-hand vehicles which, in turn, has led to major price inflation up to 60% of a compliant new van.

The evidence indicates that: compliance with air quality standards by 2024 is now not achievable.

The Prime Minister today gave the impression that his Government has so far had nothing to do with the Greater Manchester Clean Air Zone when he described it as completely unworkable. I must remind him of the facts, which he seems to need on a daily basis at the moment.

First, I am not and have never been the instigator nor the final decision maker in this scheme.

It is his Government which initiated it when it placed a legal direction on each of our ten councils.

Second, by setting a compliance date of 2024, straight after a pandemic, it is his Government’s legal direction that is unworkable.

And third, it was Greater Manchester which drew their attention to this, not the Government. Our Joint Clean Air Committee of the ten councils voted to refer this back to Government back in January and I personally relayed the request to lift the legal direction to the Environment Secretary last week and allow more time for compliance.

This is essential as it will create the conditions for a substantial, evidence-based redesign of the scheme.

Given that the disruption caused by the pandemic will last for more than one year, it is reasonable to request a corresponding delay to the period to achieve compliance.

Such a delay would provide the opportunity to make significant changes to the CAZ to allow supply chain issues and market conditions to stabilise whilst finding more effective ways to achieve compliance.

In short: the more time the Government is prepared to allow, the greater the level of protection that can be provided to jobs and businesses in Greater Manchester and the less punitive the measures will need to be.

This is why I am asking Government to allow the longest possible time scale.

Below, I have set out what I believe to be the consequences of the CAZ being implemented in different years.

However, responding to the concerns people have raised - and I have been listening - and to provide clarity where we can, I am now proposing that the Secretary of State issues a new Direction to provide for the following:

First, that the Clean Air Zone scheduled to begin on 30th May 2022 continues but as a non-charging GM-wide Category B CAZ (including buses, HGVs and non-GM registered taxis). This will allow people time to adjust and, instead of fines, people will be contacted to advise to where they can find support.

Second, that all private-use leisure vehicles - such as motorhomes, camper-vans and horseboxes, as well as cars, motorbikes and mopeds - are permanently exempted from the CAZ.

Third, if the evidence supports it, that there will no longer be a GM-wide Category C zone (including vans and GM-registered taxis) but either a reduced Category C scheme or no Category C scheme at all. This will depend on the Government decision on an amended year of compliance.

Fourth, to reconfirm that this is a temporary CAZ which will last no longer than it is needed to achieve air compliance. Early discussions have already begun with Greater Manchester Police with regard to the potential use of the ANPR infrastructure in the second half of this decade for policing purposes. If this proposal was to be taken forward, there would be a full public consultation on it and all of the implications carefully considered.

It is now for the Government to decide whether they are prepared to set a new date for compliance and what that date should be.

It is important that people are aware of the consequences of this.

If the Government permits a delay to compliance to 2027, compliance could be achieved without requiring a charging CAZ scheme – and I would suggest re-designing the scheme with that aim.

The focus will be on targeted action to increase compliance. Instead of fines, owners of vehicles which would have been in breach will instead be contacted and signposted to support and funding.

The longer time period would allow real-time air-quality data to be analysed to identify any areas which continue to exceed the legal limit. A decision could then be taken on whether additional localised measures are needed in those areas to achieve compliance by 2027.

If the Government permits a delay to compliance to 2026, I would propose a similar approach to that described above but additional measures could not be ruled out.

There would need to be a highly-targeted approach to non-compliant vehicles in areas with continuing air-quality exceedances and sufficient Government funding to support upgrading of vehicles. This would be intended to avoid any move to charging – either as a GM-wide Category B scheme or additional smaller Category C scheme – but that could be the result of the Government’s decision.

If the Government permits a delay to compliance to 2025 then, it would be more difficult to achieve and, whilst a non-charging Category B scheme would still apply from May 2022, it is likely that charges would have to apply at a specified point and a smaller charging Category C scheme in 2024, which would have to be informed by further evidence. To support this approach, the Government would need to allow more of the £120m to be used in the early stages of the scheme.

Only the Government can decide on the timescales for compliance and I have set out the scenarios for 2025, 2026 and 2027. It is up to them which of these scenarios it imposes on Greater Manchester.

Failure to lift the current Ministerial Direction leaves all ten councils with a scheme that will harm businesses and, according to the latest evidence, not achieve compliance by 2024.

A delay to 2026 or 2027 will make the CAZ much fairer whilst still achieving compliance by the middle of this decade.