Greater Manchester is marking Armed Forces Day with a renewed commitment to support current and former members of the forces, and by highlighting some of the contributions that veterans make in our city-region – including in the emergency services.

In December 2014, the Greater Manchester Combined Authority (GMCA) became the first combined authority to sign the Covenant. Working with our partners, we have established an Armed Forces Hub to co-ordinate a strategic response to the opportunities and challenges that face the Armed Forces community.

The Hub is co-ordinating activity around work and skills; age-friendly places; healthy ageing; housing, planning and transport; culture and learning; and communications. It has already delivered e-learning for all those who are seeking to develop their knowledge of the needs of the Armed Forces community and is committed to making Greater Manchester the best place in the UK for Veterans and their families to live.

Andy Burnham, Mayor of Greater Manchester, said: “Greater Manchester has always been one of the strongest recruiting grounds for our armed forces, and we recognise the massive contribution that current and former members make to our country and our communities, at home and abroad.

“In recent years we have transformed our offer to the armed forces community, and through our unique devolution deal here in Greater Manchester we continue to look at how better integrated public services can provide tailored support for people who’ve left the forces.

“We will always do right by those who serve and have served in our armed forces, fulfilling our strong commitment to the Armed Forces Covenant and backing some of the fantastic outreach activity in our boroughs.”

In national recognition of our commitment to the Defence and Armed Forces community, GMFRS has recently been awarded the Defence Employer Recognition Scheme Bronze Award.

The Award is given to employers who support and employ reservists, armed forces veterans, cadet instructors, and military spouses or partners and aligns their values with the Armed Forces Covenant.

GMFRS employs a number of members of the armed forces community and the Service is proud that their commitment has been recognised nationally.

Andy Williams joined the Army at 16 and served eight years with The Parachute Regiment, a career which included deployments to Northern Ireland, Iraq and Afghanistan. In the autumn of 2006 he was part of a unit of British Paras filmed by ITV News in Sangin, Helmand Province.

After leaving the Army in 2009 he worked in the private security industry for almost 10 years across the Middle East and Africa, before leaving to pursue a career in the emergency services. Since January 2019 he has worked as a GMFRS firefighter based at Mossley Community Fire Station, where ITV caught up with him earlier this month to film the crew’s training exercises and speak to him about his experiences.

Andy Williams said: “I think there’s a lot of transferrable skills from the military that can be applied in being a firefighter – skills and behaviours like teamwork, leadership and discipline. It was that aspect of it that appealed to me, and also the diversity of the job.

“I enjoy the diversity of the job because you don’t know what you may turn out to each day. You have to be prepared for any and every eventuality. I also enjoy working in a small team where we’re relying on each other.

“The nature of the work in GMFRS specifically is wide-ranging, which appeals to me. We have quite a number of high-rises in the city centre, and on the other end of the spectrum we have thousands of acres of moorland as well, so it’s an extremely diverse skillset that’s needed to work here.

“For anyone leaving the armed forces, definitely consider applying for the fire service. It’s rewarding doing something meaningful and having a sense of purpose as part of a team. I’d recommend it to anybody.”

For more information about working for GMFRS, the recruitment process, and how to apply, visit manchesterfire.gov.uk/join-us. 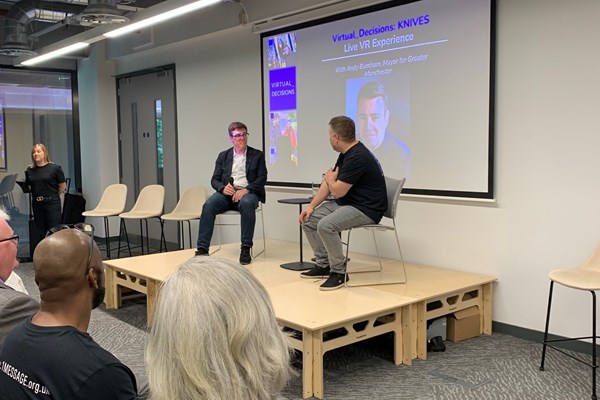