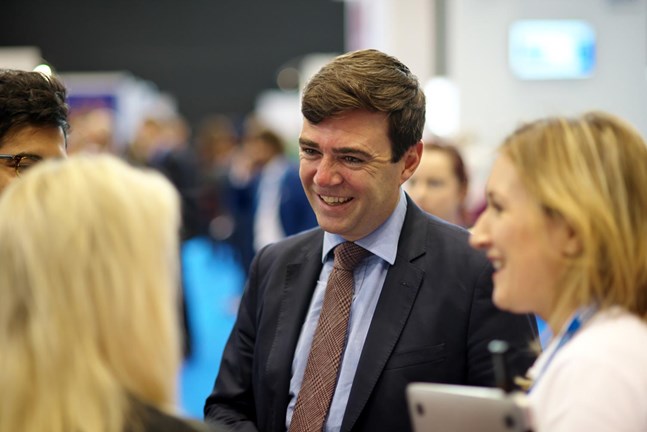 Andy Burnham was elected as Mayor of Greater Manchester in May 2017.

Prior to this Andy was MP for Leigh from 2001. In government, Andy has held Ministerial positions at the Home Office, Department of Health and the Treasury. In 2008 he became Secretary of State for Culture, Media and Sport, before returning to Health as Secretary of State in 2009.

Andy lives in Leigh, Greater Manchester, with his wife and three children. He is a keen supporter of Everton FC.

Each month, Andy hosts a question time event, giving local people the opportunity to quiz the mayor about a range of local issues. To find out more about when the next Question Time event is and book your place, keep an eye on our social media channels. View Mayor's Question Time - Facebook Video Playlist or watch the embedded Vimeo player on this page.

What the Mayor does

Responsible for transforming public services and shaping the future of our region, the Mayor represents Greater Manchester people, making the case for our region at the heart of government and on the world stage.

Andy is the chair and eleventh member of Greater Manchester Combined Authority. The leaders of the 10 councils form the Mayor’s Cabinet. He is also supported by a Deputy Mayor for Policing and Crime, and a Deputy Mayor for Economic Growth and Business.

The job of the Mayor ranges from setting budgets and priorities for Greater Manchester’s public services to acting as an ambassador for the region.

Andy is able to make some decisions independently, but others involve consultation with, and approval of, all 11 members of the Greater Manchester Combined Authority. Some decisions need unanimous support, others need a majority.

The Greater Manchester region has existed for over 40 years, but is built on a history of centuries of close local ties between our interlinked – but independent – towns and cities.

This way of working isn’t easy to get right and we’re one of the only regions to make it work so well. We recognise that our strength lies in successful partnership – not only with each other, but with other public services, businesses, local communities and the voluntary sector.

Having an elected Mayor and working together will not mean sacrificing local priorities or the unique identities that make up Greater Manchester’s diverse cities and towns. Bury is still Bury, and Salford is still Salford, but together we’re be better placed to tackle some of the bigger issues that we all have in common, such as transport improvements and growing the economy.

The Mayor of Greater Manchester will help us all benefit from the bigger picture, but local councils will still be best placed to meet the day-to-day needs of its residents – for example bin collections, housing, street cleaning, and licensing.

The 10 leaders continue to lead their own councils. The Mayor and Combined Authority do not replace, nor can they overrule Greater Manchester’s 10 local councils.

Why do we need a mayor?

In exchange for more powers and control over local budgets, Greater Manchester agreed to elect a regional mayor who would act as a single point of accountability – to both local people and central government.

Devolution means having more control over how and where we spend the money we have.

It means we can design services and find ways of working that better meet the needs of Greater Manchester and the people that live, work and invest here. It means we can boost our economy and reinvest money back into the region to where it is needed most.

Our plans for devolution are bold, radical and ambitious. Greater Manchester is set to become a major economic and political power, capable of fully supporting the people who live here without the need to rely on central government funding.