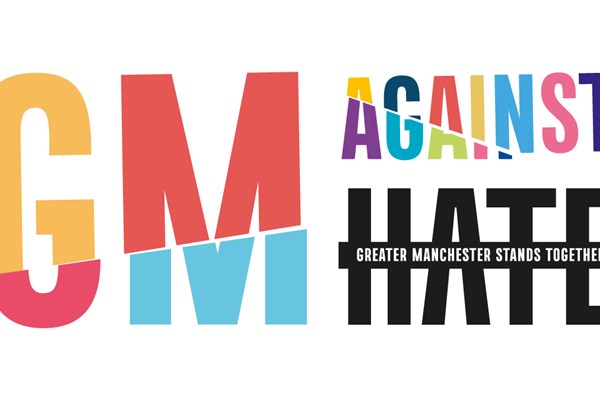 STAND together against hatred and prejudice – that’s the call to Greater Manchester people ahead of Hate Crime Awareness Week.

This year people from across Greater Manchester have shown their support to end hate crime by featuring in a video, reciting the Hate Crime pledge.

Shared across social media throughout the week the video calls on people from across the city-region to sign up to the promise at letsendhatecrime.com/promise . The promise reads:

I’m proud that Greater Manchester is a place where everyone is free to be themselves:  where no one should face violence, abuse or hatred just because of who they are, who they love, where they’re from, what they look like or what they believe.

If I see someone abused like this I won't stand by. I'll take a stand and:

challenge their abuser, if it's safe; and

By signing up to the Promise, people are able to come together and show hate crime will not be tolerated in Greater Manchester and that we’re united against it.

Deputy Mayor for Policing and Crime, Bev Hughes said: “The people of Greater Manchester have shown the world how we stand together in solidarity against those who would seek to divide us, and in support of those who face violence or abuse because of who they are.

“Now that spirit is more important than ever. As communities across the country become fractured by Brexit, we must stand together as one, and show hate won’t be tolerated in our region.”

“This week of awareness is a powerful example of what can be achieved when we stand together against hatred and discrimination and celebrate the proud diverse region that we live in.

“Everyone has the right to feel safe in their community and we all have a responsibility to make the changes we want to see.

“If you see it happen, report it. If it is safe to do so, challenge it. This behaviour will not be accepted.”

Councillor Nigel Murphy, deputy leader of Manchester City Council, said: “It fills me with pride to know that Manchester is a city which embraces people of all walks of life, no matter their religion, skin colour, where they are form or who they wish to love.

“The strength of Manchester has always stemmed from its people and I have faith they will get behind our message of support, challenge and report, and rid our city of the scourge of hate crime.”

Throughout the week there will be a dozens of activities and events across Greater Manchester to encourage people to learn more about hate crime and how to tackle it. A selection of some of the events taking place include theatre productions in Rochdale, ‘travelling’ to understand different cultures in Chorlton and celebrating the cultural diversity within the borough of Bury.

The awareness week will be launched on Monday, February 4 at the St. Thomas Centre in Ardwick, where the Deputy Mayor for Policing and Crime will set out the aims of the week – to promote diversity and community cohesion across Greater Manchester.

Hate crimes are acts of hostility, such as violence or verbal abuse, directed at someone because of who they are. It’s things like someone being spat at because they are black, or being called names because they are a Muslim and wear a headscarf, or being beaten up for being gay.

Reporting hate crime is easy – you can do it online at http://www.report-it.org.uk/home, call the police on 101 or, if you don’t want to speak to police, report it at one of dozens of independent reporting centres across Greater Manchester.