The Mayor of Greater Manchester, Andy Burnham, has called on the government to support Greater Manchester’s successful A Bed Every Night scheme as new figures show the number of people sleeping rough in the city-region has fallen 37% in a year and almost 50% in two.

Following publication of the Government’s annual rough sleeper statistics on Thursday 27 February, which show the numbers of people living on the streets in every town and city in the country based on a one night snapshot, Greater Manchester’s figure of 151 people across all 10 boroughs is a significant reduction. It is the lowest in the city-region since 2015.

The decline of 37% in the past 12 months is a greater reduction than other comparable city-regions, and is largely down to Greater Manchester’s joined-up approach of A Bed Every Night – delivered by a unique combination of the public, private, third and faith sectors – the Rough Sleeper Initiative and other local schemes.

Andy said: “Tonight in Greater Manchester around 450 people will be in shelters across our 10 boroughs – this is only happening because Greater Manchester has pulled together and raised funds to help people sleeping rough, alongside the goodwill of hundreds of volunteers.

“These figures suggest our approach is working and that the country could end this crisis much more quickly and save lives if the government was to help us fund A Bed Every Night and adopt it more widely. But we now also need much greater focus on the causes of homelessness – since 2016 housing benefit has not kept pace with rent increases. It is not enough for Government to end the freeze – they must now restore benefits to levels of actual rents.” 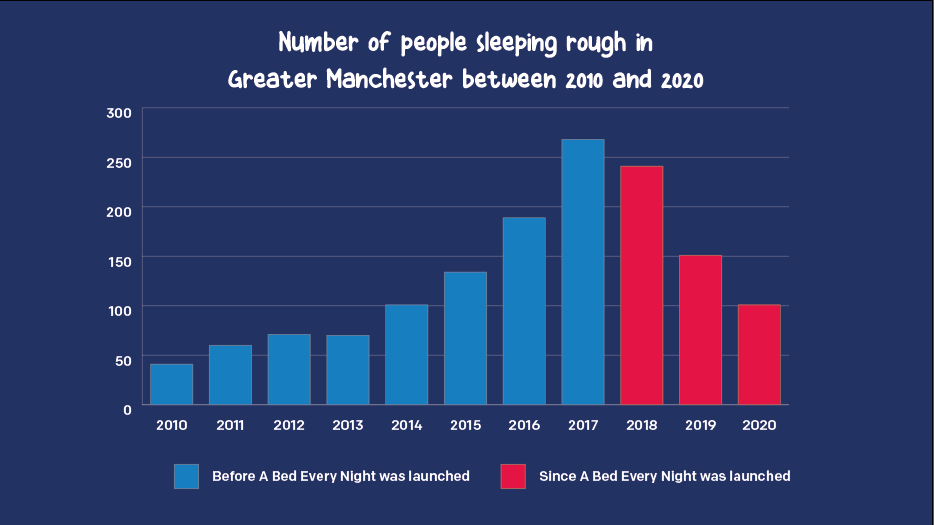 The £236m announced today by Government to support people sleeping rough, or at imminent risk, into accommodation is welcomed by Greater Manchester leaders as an endorsement of the A Bed Every Night model. However, it comes after years of reductions in local authority funding that has seen rough sleeping increase by 488% in Greater Manchester since 2010. The government’s funding announcement must therefore be followed by significant investment that ensures people have access to housing that is affordable and ongoing support where needed.

Initially a crisis response to the ‘Beast from the East’ cold weather snap in November 2018, A Bed Every Night has developed as a co-commissioned service with investment from Greater Manchester’s devolved health and social care services, homelessness, and prison and probation services, and has supported 3,400 people since its introduction. The scheme also enables those accessing help and support to recover and move into longer-term accommodation and a life away from the streets – since November 2018, 1,250 people have done just that.

For those who have slept rough for a substantial period of time, Greater Manchester’s Housing First pilot works alongside A Bed Every Night to provide ongoing intensive support in a home of choice. Funded by £7.6m of public money, Housing First in the city-region has so far helped 84 people off the streets into their own homes and is set to run for a further two years.

Paul Dennett, City Mayor of Salford and Greater Manchester’s Lead on Homelessness and Housing, said: “It is time Westminster acknowledged our pioneering work and made our policies the nationwide strategy for tackling rough sleeping. Homelessness is a crisis in this country but in Greater Manchester we have a blueprint for success, one that has helped hundreds off the streets in just a few years. But it is simply unsustainable for the government to expect local authorities and others, 10 years into a period of austerity and swingeing cuts to councils’ budgets, to fund solutions ourselves.

“Government must also review their existing ‘No Recourse to Public Funds’ policy and its impact on destitution and rough sleeping, properly address the four year freeze on the Local Housing Allowances in the forthcoming Budget and put a stop to no-fault evictions. In addition, Government’s 'Right to Buy' policy is a major contributory factor and must be suspended. Urgent action is required to tackle the real causes of the housing, homelessness and rough sleeping crisis.”

Greater Manchester’s rough sleeping counts take place regularly across all 10 boroughs. The national rough sleeper count occurred nationwide over one night in November 2019, with all data later submitted to Government and verified by Homeless Link before today’s publication.

The public of Greater Manchester continues to show its compassion and unwillingness to simply walk on by, by giving to or fundraising for the Mayor of Greater Manchester’s Charity (reg 1180418) which funds a variety of schemes addressing homelessness and rough sleeping across the city-region. There are also opportunities to volunteer your time or give goods to worthy causes – visit bedeverynight.co.uk/donate to find out more.