THANK YOU to everyone who shared their views with us in 2019 – we received nearly 50,000 responses via our online survey hub www.GMConsult.org.

Here’s a snapshot of how your views on some of our work has made a difference.

Greater Manchester’s Plan for Homes, Jobs and the Environment

2019 was still in its infancy when consultation on a redrafted second Greater Manchester Spatial Framework was launched. The rewritten plan focuses more heavily on the environment. It included an overall reduction in proposed green belt release of more than 50% by removing some areas that had been earmarked for development in the previous plan, reducing the loss of green belt within sites, and proposing additions to the green belt. Around 17,500 people and organisations took part in the consultation, and all responses and documents submitted have been published on our website. They are currently being analysed and a second phase of consultation will be held later this year.

Tackling causes of crime and improving the criminal justice system

2019 was an important year for making Greater Manchester one of the safest and strongest places, during which we worked closely with the GM Health and Social Care Partnership on strategies which looked at some of the underlying causes of criminality.

The Drug and Alcohol Strategy aims to prevent and protect people, and reduce the harm caused by drugs and alcohol, and the Health and Justice Strategy aims to improve the health of people who are already in the criminal justice system, or who are at risk of entering it – either as a victim or offender.

The consultations on the vision, priorities and actions for both strategies were well received by the public, and those working in the sectors. The Drug and Alcohol Strategy has already been approved by the GMCA, and the Health and Justice Strategy will be considered at the January meeting.

We are also working to ensure that victims and witnesses of crime receive a good service when they contact Greater Manchester Police, and they are properly supported to cope and recover. The first survey sought to understand victims and witnesses’ experiences of reporting a crime, the support they received afterwards, and their experiences of going through the court system; and the second survey sought the views of victims of hate crime, as well as views on the draft priorities of our plan to prevent and tackle hate crime. Responses to both surveys are currently being analysed, and will be used to inform a review of the services for victims we commission.

Our Pass – Your journey starts here 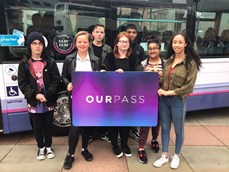 Young people have also been having their say and influencing our work. The Youth Combined Authority were instrumental in naming and designing Our Pass – the new bus pass with additional opportunities and benefits. A survey of 16-18 years asked what type of opportunities they wanted to access, and responses were a catalyst for more sporting activities being included, as well as opportunities to win free tickets to events.

2019 ended with the consultation on a proposed bus franchising scheme. When it closed on January 8, more than 8,000 people and organisations had commented. These responses are now being analysed by an independent market research agency Ipsos MORI. We will then publish a report on the consultation responses before the Mayor of Greater Manchester, Andy Burnham, decides whether or not to implement the proposed franchising scheme. It is expected that this decision will be made in March 2020.

The new year will see no shortage of opportunities to let us know your views on our plans, strategies and proposals, including police funding, gender-based violence, and the spatial framework.

We will continue to host our online surveys on www.GMConsult.org , which also includes a “We Asked, You Said, We Did” summary, and we publish all responses that respondents given permission for, thus ensuring transparency of our decision making.

If there are other matters you want to have your say on, we would love to see you at Mayor’s Question Time, which takes place every month in a different borough. Check social media for when the next event is taking place.

For more information about having your say in the work of the GMCA and GMFRS, please email engagement@greatermanchester-ca.gov.uk.