Our week at Digital City Festival 2022

From the 7-11th March 2022, the much-anticipated Digital City Festival was back at venues across Greater Manchester for its physical event in over two years. The week saw a whole host of exciting events on topics spanning from AI to digital marketing and everything in between. 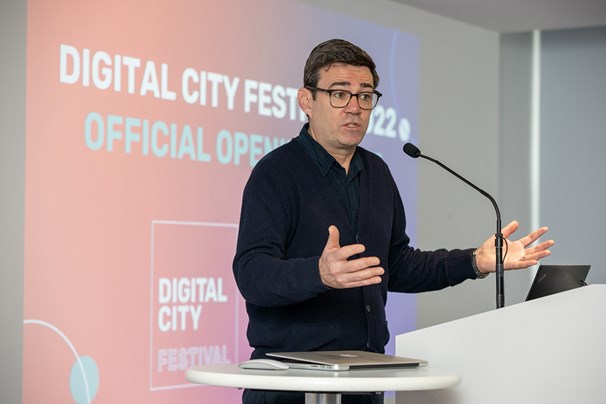 On the Monday the week kicked off with an opening event held at HOST offices in MediaCityUK, Andy Burnham, Mayor of Greater Manchester spoke at the event where he celebrated Greater Manchester’s digital economy worth £5 billion, our aspirations to become the home of Cyber and celebrated our position as Europe’s fastest-growing digital and tech hub.

The Mayor also spoke about the importance of inclusivity in digital and the work being done to address this issue locally. He closed his speech by saying: “Let’s use Digital City Festival 2022 – to build Greater Manchester as a digital city region, but actually to build the new world post-pandemic, and make sure it’s a world that involves all of our people, builds resilience in all of our communities, but also builds the prosperity of this great place.”

The Mayor spoke at the opening alongside Festival Director Martyn Collins and the CEO of IN4 Group Mo Isap.

Monday also featured a Cyber Summit at HOST Salford and featured a series of inspiring panel discussions, networking, Q&As, expos and concluded with a drinks reception. We were pleased to see 120 attendees across 50 organisations at the summit.

The Summit was hosted in collaboration with key partners, including HOST and the Greater Manchester Cyber Security Advisory Group. The day celebrated the region’s outstanding cyber security capabilities and the inclusive economic growth that this brings to the digital-city region.

On Tuesday GMCA hosted two Digital City Festival fringe events to showcase the work being done across Greater Manchester and beyond to bridge the digital divide and address the digital skills gaps.

The speakers showcased local initiatives they are working on to tackle the digital divide in Greater Manchester, including TalkTalk’s offer which provides job seekers with free internet access and Salford Foundation’s Digital Buddies scheme which paired young volunteers with residents to help them learn and improve their digital skills.

Tuesday was also International Women’s Day and to mark the day GMCA ran a weeklong campaign celebrating all the amazing women working across the Greater Manchester digital sector. The campaign featured videos, blogs and quotes featuring women sharing what the theme ‘Break the Bias’ meant to them.

On Tuesday evening, the Digital City Leaders’ Reception was sponsored by MIDAS took place. Hosted at Cloud 23 our own GMCA Lead for Education Skills, Work & Apprenticeships and Digital, Cllr Bev Craig opened the event, with other remarks from Tim Newns of MIDAS, Alastair McGeoch, Director of Software at Roku and Darren Mitchell, Country Manager at Zenjob. 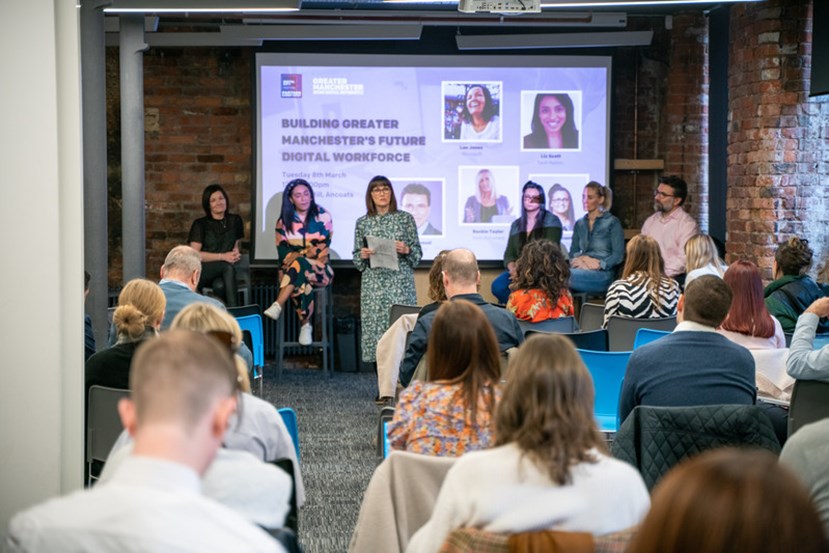 “When we think about our thriving digital, creative an tech sector in Greater Manchester, this hasn’t happened by accident and that’s one of the things that makes Greater Manchester such an attractive place – a place with a strong civic mandate behind all of what we did and strong ambition that we want to do more, we want to go faster and we want to see our digital economy embedded in delivering for Greater Manchester people” said Cllr Craig.

Also on Wednesday the Mayor attended the Digital City Festival expo to visit two organisations stands and find out more about their work. His first visit was to Sale based charity Everyone Can who support disabled people to access digital tech & deliver inclusive gaming sessions. During his visit the Mayor has a go at an inclusive car racing game which involved using only your eyes to drive the car. 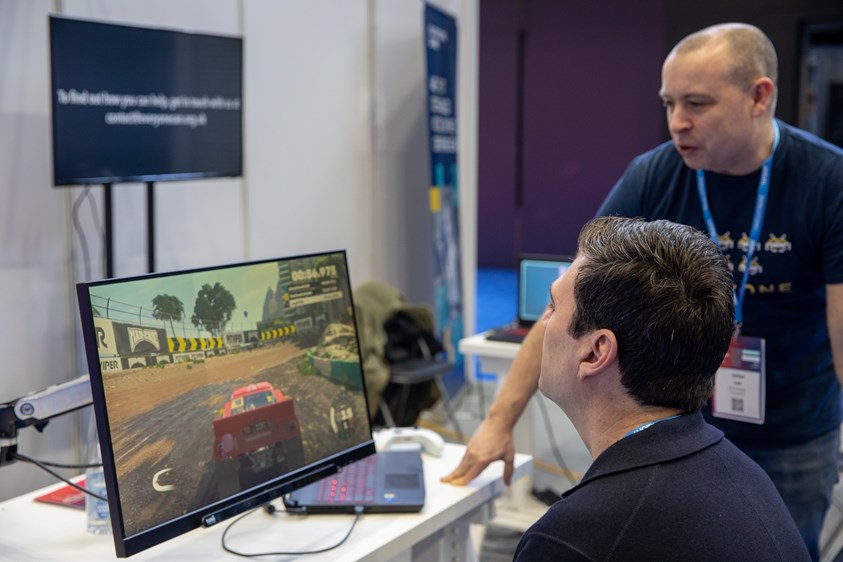 On Thursday evening the Digital City Awards took place at Etihad Stadium. We were excited to have not one but two colleagues up for the Digital Leader of the Year Award 2022, on the night we were delighted to see Phil Swan, GMCA Digital Director win the award. 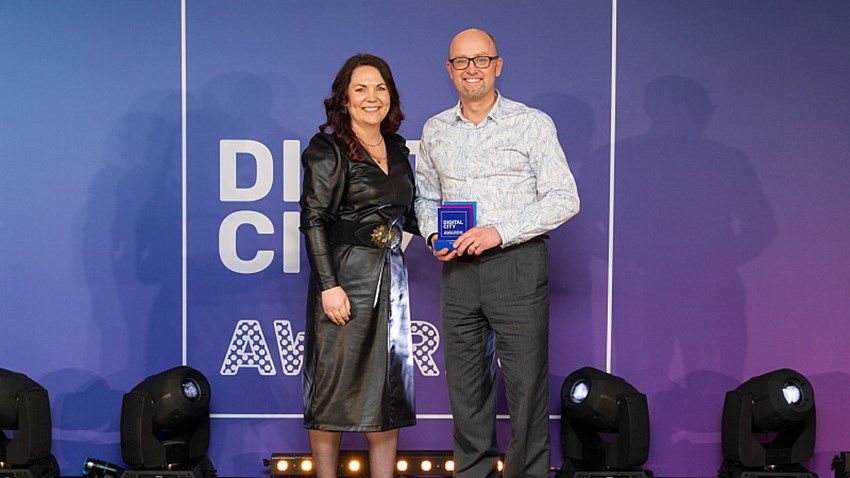 It's safe to say it was a busy week but from conversations we had throughout out the key thing discussed was how valuable and important it was to be back at events in person, to be able to network and share key learnings and insights face to face. Throughout the week we engaged with 111 organisations through attendance at our events and partner events. We are looking forward to engaging and collaborating with these organisations as we continue to work toward our ambitions to become recognised as a world leading digital city region. 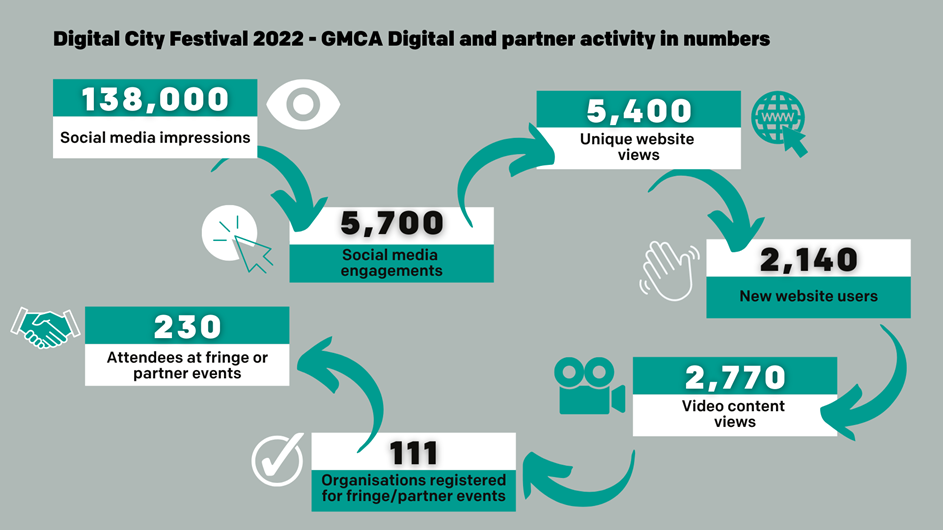 Digital City Festival may be over but there are lots more exciting digital events on the horizon to look forward to. In April, Connected North will be coming to Manchester for the very first time. Connected North is all about celebrating connectivity as key for economic and social prosperity, the event will welcome connectivity leaders to explore the most important regional issues around enabling the North’s connected future. We'll also be speaking at DTX Manchester - DTX Manchester (previously IP EXPO) "provides inspiration and confidence to your next steps. Making IT easier for you. As the anchor event of the inaugural Manchester Tech Week, this will be the largest gathering of enterprise IT professionals that the North has ever seen".

Find out more about Connected North

Find out more about DTX Manchester 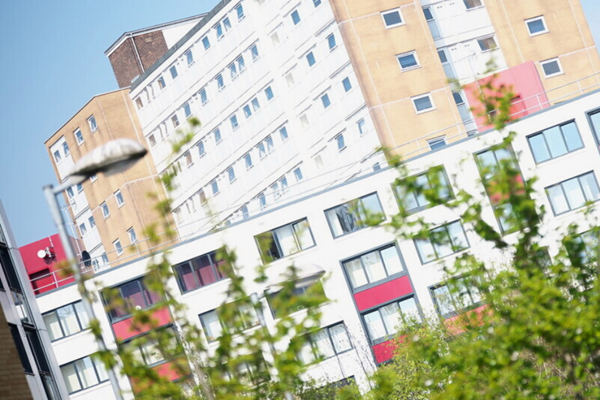